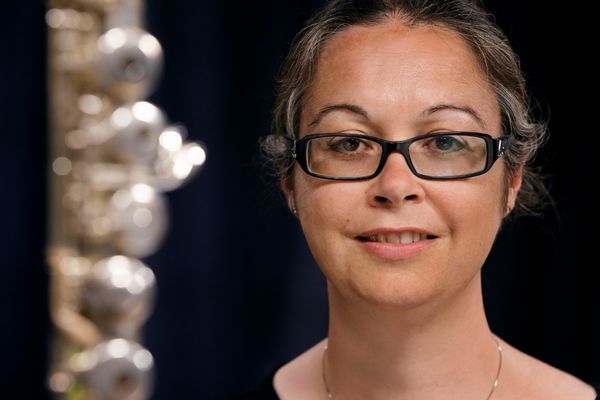 Carla Rees is a British low flutes specialist who has developed an international reputation for her innovative work. Her multi-faceted career encompasses solo and chamber music performance, collaboration, recording, composing, arranging, editing and teaching. She performs on Kingma System flutes (made by Eva Kingma, Bickford Brannen and Lev Levit), as well as both baroque and contemporary repertoire on baroque flutes.

She is Artistic Director of rarescale, a contemporary chamber ensemble with whom she works to create and promote new repertoire for her instruments. She is also a member of the Goldfield Ensemble, Edison Ensemble, and plays in a trio focussing on Feldman’s music with pianist John Tilbury and percussionist Simon Allen.

Carla leads rarescale Flute Academy, an acclaimed flute ensemble for university level players, for whom she arranges numerous works. The ensemble has performed in Greece, Poland and the United States, and is currently collaborating with a number of composers to create new repertoire.

An experienced recording artist, she appears on more than 20 CDs (including for rarescale records, NMC, Metier, Delphian, Heritage records and Edition Troy), including concerto recordings with the Royal Ballet Sinfonia and Ensemble Neumusik im Ostseeraum (Germany). She also appears on incidental music for film, TV and radio, including the 2018 release Mary Magdalene (music by Jóhann Jóhannsson and Hildur Guðnadóttir), and the BBC Radio 4 series Dear Professor Hawking. She has over 80 published compositions and arrangements (available through Tetractys), with recent performances of her works in the UK, USA, Canada, Japan, France, Poland and Belgium.

She completed her PhD at the Royal College of Music in London in 2014, researching extended techniques for Kingma System alto and bass flute with the support of scholarships from the Arts and Humanities Research Council and the RCM. She is Programme Leader for an innovative online Music degree at the Open College of the Arts and has taught the flute at Royal Holloway University of London since 2006. In 2021 she was appointed the first Professor of Low Flutes and Contemporary Flute at the Royal Academy of Music in London.