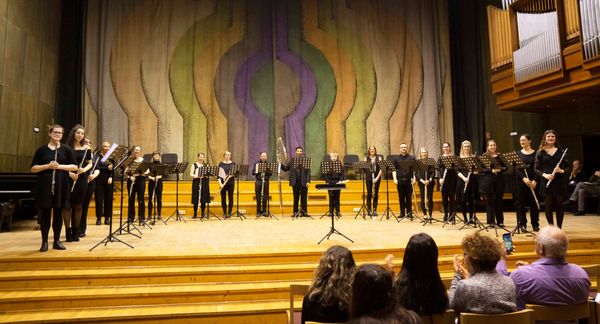 Carla is the Artistic Director of rarescale Flute Academy (rFA), an ensemble which was formed in 2007 to provide opportunities for advanced flute players to develop performance skills on the alto and bass flute, as well as providing experience in organising concerts and promoting events. Senior members of the Academy perform in concerts in London and the surrounding area, as well as providing music for functions and professional engagements.

rFA’s membership ranges from university undergraduates to professional players and adult amateurs, many of whom travel from all around the UK for monthly rehearsals in Windsor. The ensemble has performed at the British Flute Society’s international Conventions, at St Catherine’s British School in Athens and Iklectik in London, as well as in numerous lunchtime concert series. Last year they gave their debut American performance, appearing at the international Low Flutes Festival in Reston, Virginia, and in April 2019 they will be representing the UK at the Flutes Across Europe Flute Ensemble Festival in Poznan, Poland.

The group’s repertoire is formed mostly of arrangements of classical orchestral works, often featuring more than the usual number of alto and bass flutes, and also includes new works written specially for rFA. The is currently fundraising towards the costs more low instruments (specifically contra-alto, contrabass and subcontrabass flutes) for the use of the ensemble.

Entry is by audition or invitation and we are currently accepting applications for membership from diploma level players and beyond who are current University students or within 3 years of graduation.

For further information regarding music for functions, performances or to audition for a place in the ensemble, please use the contact form.